Wanna see a show for free?

It’s easy.  Just head on over to the Norm Adams Teen Center this Friday, April 22.

We’re taking a break from recording to play some special versions of songs from our upcoming album. We’re gonna show you how heavy TFD can get. You don’t want to miss it. Seriously.

This is a really cool venue. They have comfy couches! We had a great time the last time we were here and can’t wait for Friday. See you then!

Yup, the show at McGann’s on March 18 has been canceled. Lame, eh?

Hit us up for tickets if that’s something you’re into. We’ve got connections. tunafishdiscrepancy@gmail.com
Holla. Is that how it’s spelled? I think so, but I’m not quite hip.

Remember when it said McGann’s up there a few lines? And remember how the text was blue? That means it’s a link, connected to the pub on Google Maps. Fancy! And we mustn’t forget our friends at F Nice Records for hosting this little shin dig. Is that how you spell shin dig? I think so, but I’m not quite hip.

In other news, we had a blast at the [Factory]. We are proud of my The Fitted Shirt! I’ll be recording a couple TFS songs tomorrow. Watch out for album #2. And check out the first one if you haven’t. Yeah, you can get Hybernation from iTunes and Amazon, but come on, be a fan! Go to the show and buy a disc!

Ok, wrapping things up, because I’m getting punchy. There’s another stupid video of TFD recording and goofing off. It’s on the youtubes, but I’ll post it where folks can find it easy. After my free Indian dinner. Yum!!

Saturday 2/19/2011 was day one of our adventure in recording a record. We captured drum performances for three songs, “The Devil Don’t Share Nachos With No One”, “Vampires”, and “Black Hole Smile”, on which Tom did some very interesting stuff. This is going to be a fun record.

The idea is to take you nice folks who visit here along for the ride, which basically means I’m going to subject you to weirdness once or twice a week. Here’s the video from Day 1:

Thanks for watching,
-Ross

Here we go again! We’ve got a few shows coming up, two of which are with our good friends, The Fitted Shirt!

In the midst of all this live rock action, we are recording our first, proper LP. It’s rather exciting.
A world tour of New England is sure to follow.

So, um, see you all on Friday? 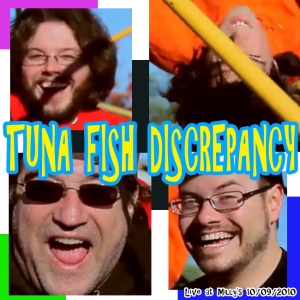 Shows this weekend went very well! Friday night at Madison’s Irish Pub we had a great time hanging out with Sex Tax and Mongrel, both great bands made up of great people. The night was packed with rock, cans of tuna, foxy grandmas, and general goodness. If you missed it, you’ll want to try and avoid such behavior in the future.

Saturday was an eclectic night at the [Jam] Factory starting off with the improv comedy of Granite State Theater Sports, those crazy talented folks, followed by Not Your Mom’s Sushi: A Rockin’ Christmas Spectacular, combining the powers of Not Your Mom’s Musical Theater and Neptune Sushi Productions to raise money for both companies. Rich Hurley of Granite State Theater Sports emceed the evening, providing hilarious commentary, including our set… whether he wanted to or not.

Thanks to everyone who came out to the shows (as performers or audience members), The [Jam] Factory, and Madison’s Irish Pub. You all rock.

We’re heading into the studio on Thursday to finish up the live album documenting our tour through time and space, so be sure to check that out sometime next month. Other than that, it’s all relaxation for the rest of the year.

The Fall Micro-Tour has come to an end. Thanks again to F-Nice Records and Christine for having us/getting us the show. You can check out my interview on the Boston Local Music Show right here. If you dig the show, it’s four hours packed full of local music. If you’re only into music for TFD (and who could blame you?) scrub forward to about 2h50min. in to hear me hang out and play a few tunes.

Tonight, we’ll be playing Milly’s Tavern with Chris Emery. That dude is talented. And that’s the lineup. Us and Chris. It will be an intimate evening of pop-rock pleasure.

Come out and say hello.