What is this dirty old thing?

Found a three year old setlist at rehearsal. Bar napkins are the way to go.

Time to make a new one for our show on November 9th at Penuches in Concord! 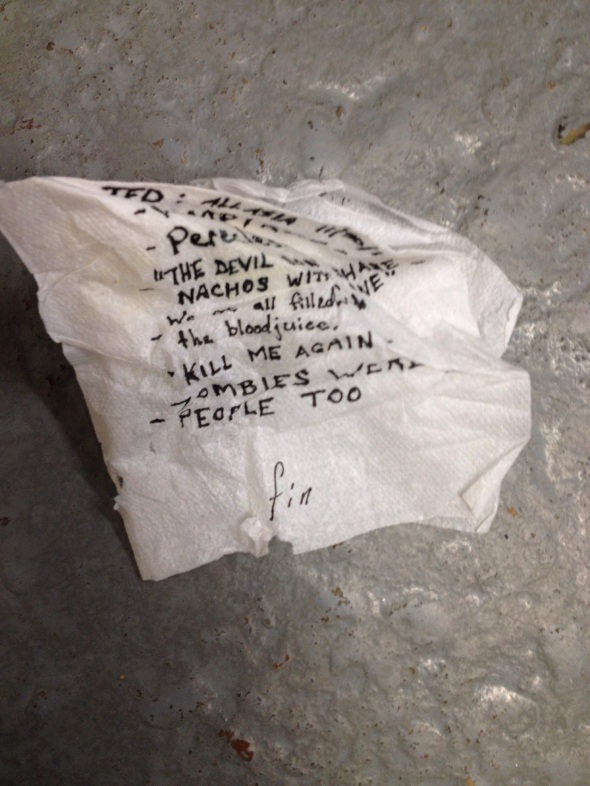 Before The Virus Took Hold

Tomorrow night I’ll be filling in on bass for The Fitted Shirt at Ghostlight Theater Co.’s First Annual Zombie Ball. We’ll be turning Club Lafayette into a graveyard of dancing corpses. Also, a graveyard of discounted Ghostlight memberships and a 50/50 raffle. You’ll also get to see this band called Mask & Raid. Oh, and check out these sweet posters:

All right, I think that’s it for now. See you tomorrow!
-Ross

The Fall Micro-Tour has come to an end. Thanks again to F-Nice Records and Christine for having us/getting us the show. You can check out my interview on the Boston Local Music Show right here. If you dig the show, it’s four hours packed full of local music. If you’re only into music for TFD (and who could blame you?) scrub forward to about 2h50min. in to hear me hang out and play a few tunes.

Tonight, we’ll be playing Milly’s Tavern with Chris Emery. That dude is talented. And that’s the lineup. Us and Chris. It will be an intimate evening of pop-rock pleasure.

Come out and say hello.