Cats! (and other animals)

Something big happened today. I mean 66 tracks big. Starving Raptors and Headhat Records teamed up to put this massive compilation together. Artists from around the world gather on this 66 track album to support the NHSPCA. (Weird, right?). It’s epic. It’s for cats. It’s for dogs. It’s for capybaras. You want it.

Right now, “Headhat For Cats (and other animals)” is available here at Starving Raptors’ bandcamp page for a $5 donation (or more if you want to feel good about yourself). It will be available here at Webhat on May 15th.

On May 5 (that’s this Saturday!) you can catch us at Milly’s Tavern in Manchester, NH (Facebook Event Page) performing with K-The-I???, PT Burnem and Paulie Think of Icebox, and Adhesiveslipper. You can find all of us on the compilation and at Milly’s. Great, right? Right.

Come hang out at Milly’s Tavern on Cinco de Mayo (aka Free Comic Book Day) for a night of weird music and comics! We’ve gone through some line-up changes while maintaining awesomeness. Check out the flyer: 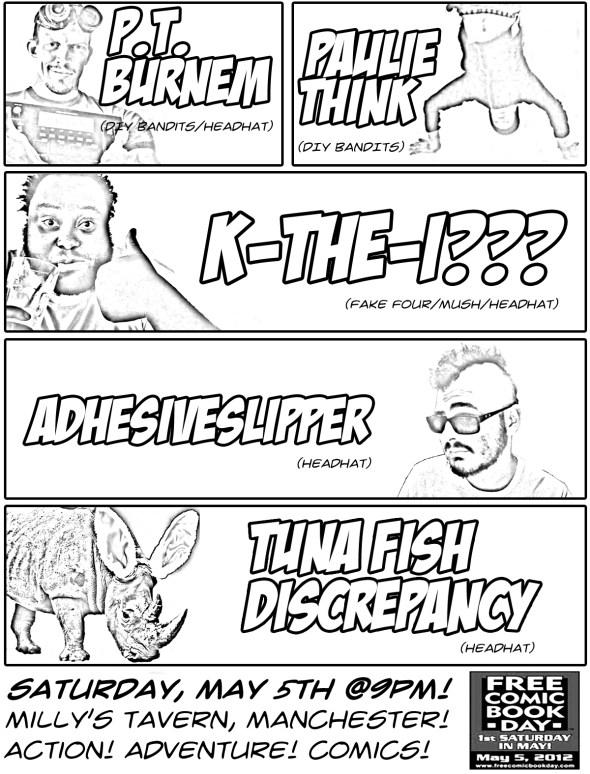 On Saturday, November 26, we will be performing with Force Driven and Brainfood at Milly’s Tavern. If you’ve seen us, you’ve probably seen Force Driven, but have you seen Brainfood?

I mean, look at that. I’d wear that watch. I’d also watch that band. These guys are weird in all the right places. They really bring the thunder. And by the thunder, I mean the rock. And by the rock, I mean… never mind. This show is going to be great, and it will only cost you $5 to find out for yourself.

You may also be interested to know that Milly’s Tavern is collecting canned food, clothing and any other donations you may have to offer from now through December on behalf of New Horizons. You should check out their website for volunteer opportunities and a list of needed items, if that’s something you are able to do this year.

Have a wonderful Thanksgiving, take a day to recover from food and family, then join us at Milly’s Tavern for a night of original music.

Mmmmm, look at it. It’s like Gak, or something. Remember Gak? I bet it would be funny if you brought this Grey Matter to the show and asked the band to sign it. I dare you.

[Not Your Mom’s Musical Theater]

If you haven’t already, stop by Not Your Mom’s Musical Theater. Keep up with the [title of blog] videos leading up to the NH premier of [title of show]. If you saw their production of “Musical of Musicals: The Musical”, then you know how talented this cast is. [Very].

What does this have to do with Tuna Fish Discrepancy? Sure, I’m a board member. (I accidentally typed “beard member”, and felt it was worth retyping because it is also true). But we’ve also got something rather special in the works. Keep watching here or there to find out what the heck I’m talking about.

We’ve got some shows coming up that I should tell you about so you can see us do what we do.

November 30, All Asia, Cambridge MA
December 3, Milly’s Tavern, Manchester NH
December 17, Shenanigans, Milford NH (I think this one is happening. You’ll hear about it next month if it’s a go.)

Talk to you soon,
Ross