Cats! (and other animals)

Something big happened today. I mean 66 tracks big. Starving Raptors and Headhat Records teamed up to put this massive compilation together. Artists from around the world gather on this 66 track album to support the NHSPCA. (Weird, right?). It’s epic. It’s for cats. It’s for dogs. It’s for capybaras. You want it.

Right now, “Headhat For Cats (and other animals)” is available here at Starving Raptors’ bandcamp page for a $5 donation (or more if you want to feel good about yourself). It will be available here at Webhat on May 15th.

On May 5 (that’s this Saturday!) you can catch us at Milly’s Tavern in Manchester, NH (Facebook Event Page) performing with K-The-I???, PT Burnem and Paulie Think of Icebox, and Adhesiveslipper. You can find all of us on the compilation and at Milly’s. Great, right? Right.

On Saturday, November 26, we will be performing with Force Driven and Brainfood at Milly’s Tavern. If you’ve seen us, you’ve probably seen Force Driven, but have you seen Brainfood?

I mean, look at that. I’d wear that watch. I’d also watch that band. These guys are weird in all the right places. They really bring the thunder. And by the thunder, I mean the rock. And by the rock, I mean… never mind. This show is going to be great, and it will only cost you $5 to find out for yourself.

You may also be interested to know that Milly’s Tavern is collecting canned food, clothing and any other donations you may have to offer from now through December on behalf of New Horizons. You should check out their website for volunteer opportunities and a list of needed items, if that’s something you are able to do this year.

Have a wonderful Thanksgiving, take a day to recover from food and family, then join us at Milly’s Tavern for a night of original music.

Mmmmm, look at it. It’s like Gak, or something. Remember Gak? I bet it would be funny if you brought this Grey Matter to the show and asked the band to sign it. I dare you.

I have a little catching up to do.  Lots of cool goings on.  First, I’d like to thank Carly Jo Geer for taking the time to record some stuff for the upcoming TFD record.  She is one hilarious human being, and I’m happy to be able to immortalize her with our ridiculousness.

We recently played a show with some very talented people.  Brainfood, Monkey Suit, and Nine Unknown (for which Tim and I play guitar and keys, respectively).  It was a very fun, laid-back day and I can’t wait to do it again next year.

Coming up on Thursday, 9/29 with A Simple Complex at the Shaskeen on Elm Street in Manchester, NH.  Check out the event page on Facebook and join us.  Beer for Boobs!  Why wouldn’t you come?!

I’ll be filling in on the bass guitar for The Fitted Shirt for a couple shows.  First up is Ghostlight Theater’s Zombie Ball on Saturday, 10/22.  Then on Sunday, 10/30 at The Jam Factory for Not Your Mom’s Musical Theater’s Halloween Party.  The Fitted Shirt will be infusing their set with Halloween themed songs.  (TFD will be playing the NYMMT Halloween show, keeping to our regular set.  There are enough monsters in our songs as it stands!)  Both shows are sure to be filled with weirdness you don’t want to miss.

I recently shot a music video for Win Your Love with director Allie Dodd. I hope I don’t look silly. I trust Allie. I’ll post the link as soon as it’s up. (More videos are on the way as we get closer to the album’s completion).

I feel like I’m forgetting something.  I probably am.  So it goes.

We Are Still Alive

The initial plan was to remain in hiding until the album was complete, coming out with a barrage of shows and extracurricular activities.  This is still the plan, for the most part, but all of us tend to get wrapped up in a plethora of projects. Therefore, there will be less hiding.

Tim and I, for instance, are recording with Nine Unknown, and he has an album with Force Driven that’s even closer to completion than the Tuna record!  I’ve been busy working on soundtrack material for various film projects, some of which you can see at the upcoming SNOB Film Festival.  Nat and Tom (besides exciting personal endeavors) have been working on new material with The Fitted Shirt, whom I’ll come back to shortly.

I wonder if I just used “whom” correctly…

Shows!  Boy, are we playing some shows.  Saturday, September 17, TFD will be kicking off a late afternoon/evening of rock the likes of which can only be seen once a year.  The event also includes the best smelling port-o-potty I have ever had the pleasure of excreting in.  (Too much?  We all do it, why not get excited when it’s especially pleasant?)  Bands include Nine Unknown, Brainfood, and Monkey Suit.  If you’re wondering why I haven’t told you where this is, there is a reason.  It’s a private-ish annual party/cookout/rock-fest in someone’s back yard (in Hooksett), and I don’t think publicizing such details (no matter how few people read this) is very appropriate.  So, if this sounds like something you’re totally into, send me a message and I’ll hook you up.  You’ll be fed well.  You’ll drink (if you do that).  You might even get a hug and a balloon animal.  These are all things that happen.

Enough about that, it’s time to talk about boobs.  On September 29th we’ll be performing at the Shaskeen in Manchester with A Simple Complex for the event, Beer For Boobs.  This show is made possible by The Breast Friends of New Hampshire, and proceeds from the show go to The Avon Walk for Breast Cancer.  Tickets are $20 and can be purchased here.  According to the site, there will be raffles (including a 50/50), specialty drinks, and “more”.

More shows to come in October with news about the album, new videos, and “more”.  See you soon!

p.s.  I never came back to The Fitted Shirt.  We’ll be doing some shows together in October.  They will be posted soon.

Wanna see a show for free?

It’s easy.  Just head on over to the Norm Adams Teen Center this Friday, April 22.

We’re taking a break from recording to play some special versions of songs from our upcoming album. We’re gonna show you how heavy TFD can get. You don’t want to miss it. Seriously. 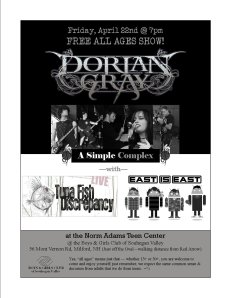 This is a really cool venue. They have comfy couches! We had a great time the last time we were here and can’t wait for Friday. See you then!